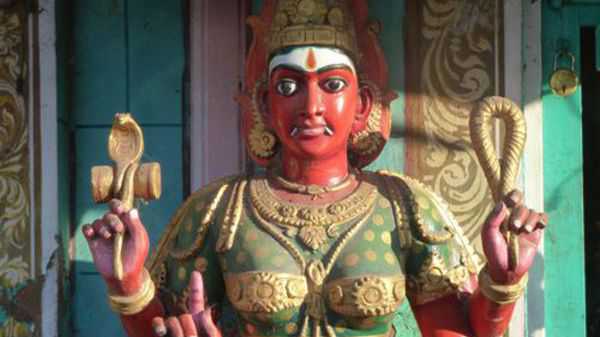 This Rudraksha bead is one of the most sought after. The reason being it is the symbol of Lord Shiva himself or the highest supreme being, it can bring mental focus to the wearer. It also raises one above the materialistic world that we live in, just as the lotus flower grows above the dirty mud. This bead is for detachment and moksha and is said to remove the sins of the wearer.

In time he or she will become detached as one becomes closer to Lord Shiva, as an example we have had one client who left his wife and ended up in mount Kailash two weeks later, the effect is different for each person. It generally brings inner peace and leads one to deeper meditation. The wearer will be able to reach a higher level of spirituality with ease.

This bead astrologically represents the Sun, so if one has a malefic Sun in their jyotish chart which would affect the father’s longevity its one of the recommended beads. Afflicted Sun would also affect one’s leadership abilities. The Eka mukhi bead is the remedy for this problem.

There are several mantras which can be recited to evoke the bead, namely Om HreemNamah, Om NamahShivaya, and Om Rudra Eka Vaktrasya.

Sadly, many of these beads are faked. They are either made from fiberglass or by carefulmanipulation the two mukhi beads. In ancient times it was possible to find round eka mukhis from Nepal, but these days they do not exist. We have investigated several beads, but the certificates and xrays were all faked. Today the most common one mukhi is the half moonor candrakarvariety which is a replacement of the extinct round bead, though this is not from the Elaeocarpus Ganitrus family, but Elaeocarpus Tuberculatus. The trees can be found in South India and Sri Lanka.

The Javanese beads are perfect eka mukhis being oval and have a clear natural line, but the size being around 10mm, makes them impractical to wear unless they are “caged” or made into a mala. We have occasionally found some of these beads reaching around 17mm in length and are more practical. Besides the Javanese, there is another genuine bead known as the savar or rider. This is a one mukhi bead riding on another bead such as a panchamukhi. Many of our clients seek this bead.

Eka mukhi is mentioned in various ancient sources such as the Shiva MahaPuran (Vidyesvara Samhita) Chapter 25 part 64 where it mentions;‘A Rudraksha of single face in Siva himself. It bestows wordly pleasures and salvation. The sin of Brahmin slaughter is washed of by mere sight’. In Padma Puran Chapter 57 part 38-39:‘The Rudraksha of one mouth is virtually Siva; it removes (the sin of) brahmanacide. Therefore, one should wear it for the destruction of sins. He would go to Siva’s heaven and rejoice with Siva. O Kartikeya, a man would obtain a Rudraksha of one mouth due to great religious merit and due to Siva’s favour and would also got to Kailash’. In Srimaddevibhagavat (11th Skanda) Chapter 4 part 12; ‘One mukhi represents Siva Himself and absolves the sins of Brahmanas killing’. In Rudraksjabalopanisad: Kalagni Rudra replied: ‘The Rudraksha of one mouth is virtually Siva, which upon wearing gives Sivahood’. The eka mukhi is also mentioned in these holy scriptures: Mantramaharnava, Nirnayasindhu, Brihajjbalopanisad, Mahakala Samhita.

To sum up the benefits are spiritual enlightenment, mental focus, self confidence and the wearer has the ability to detach from this material world but at the same time live peacefully in society. There are claims the one mukhi cures diseases such as right eye defect, bowel issues, bone fracture, fever, headache and heart disease.